Rapport – that’s where it’s at!

Have you ever sat and people watched? I was sat waiting to board a flight home last night and from a distance I noticed a group and 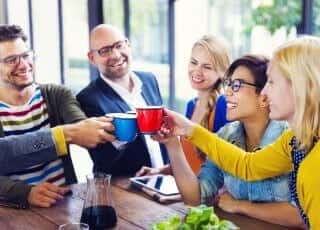 I became curious … what was it about that specific group that was different?

There they were, a group of men – chatting away, laughing and joking (and they say women talk!) … they were clearly off somewhere together, or perhaps returning from an adventure together. Excitement, fun and laughter was the order of the day. I had no idea how well they knew each other – but that didn’t seem to matter. There was no clear leader and some just quietly looked on and smiled as the banter around them rolled on- no one looked out of place. They found similar things funny, and seemed at ease in each other’s company – the phrase “getting on like a house on fire” springs to mind. I observed that they all had similar body language (stance, mannerisms etc), used similar language – they just seemed to get each other.

Then another group caught my eye … a group of individuals that were nothing like the first group … there appeared to be little connection between them, minimal conversation and as they stood there, their body language was all different – I wondered did they have anything in common? (I imagined so, because they were clearly travelling together), but you couldn’t get such a different vibe from the 2 groups.

So why the difference?

It boils down to a small, yet significant word …. Rapport. So, what is Rapport? – we’ve pretty much all experienced it – can you recall a time when you were with your closest friend – you just ‘got each other’ – you establish and maintained rapport – I would guess you spoke in a similar language, sat in a similar way  and if you watched 2 close friends in deep conversation you often see them mirroring each other’s body language (their movements/gestures). Next time you’re with someone you know well, perhaps your  best friend  … just take a few moment to observe what is going on – that’s the best way to understand and truly know what rapport is. In a business context you are more likely to agree with, buy from or support someone you can relate to, versus someone that you can’t; with successful interactions depending largely on our ability to establish and maintain rapport.

Rapport is the basis of all communication; without rapport there is no REAL communication – in my view it’s just words being exchanged – there is minimal understanding (and often there is the risk of misunderstanding) – e.g. it might feel like you are ‘taking to a brick wall’ at the extreme. But, in NLP we believe that we are 100% responsible for our communication; a person who has flexibility in their ability to build rapport with anyone often comes out on top!

On our 2 day NLP Business Diploma and NLP Practitioner courses we teach you the 7 steps to building Rapport with anyone – even people you don’t like, so that your communication is at least considered by the other person.

The first step to building rapport ….

‘People like people who are like them’ – so the more like someone you can be the more likely to are to be in Rapport. The first step we teach people in order to help them build rapport is to focus on breathing like the person you are talking to (no I haven’t gone mad – just hear me out!). If you are able to match and mirror someone’s breathing you have a great chance of starting to building Rapport.

How can you do this? – if you use perhieral vision you can discreetly notice how someone’s chest rises and falls out the corner of your eye, so to speak. Another way to know if someone is breathing out is to listen – when people talk, they talk on their out breath (this tip is fantastic if you want to build rapport via the phone – as they are talking you breath out).  Give this a go and see what happens …..

Want to learn more about rapport?

If you want to improve your communication why not come on one of our NLP Practitioner courses and learn the art of real rapport and communication …. call us on  02920 023311 if you’d like to know more!