History of NLP: Where did it come from?

For many people the history of NLP starts in the 70’s and starts with the story of Bandler transcribing the work of Fitz Perals, Grinder being the Professor of Linguistics and then later on the group they both worked with, the study of Virgina Satir and Milton H Erikson and so it goes on. Whilst Bander and Grinder were responsible for pulling together many strands of personal development/change and creating new ones, what many people don’t know is that the history of NLP could be argued to have it’s earlier roots much further back …

Are you sitting comfortably, if so I’d like to tell you a story …

A long time ago, in a land far away there was an ancient civilisation that travelled the oceans on papyrus rafts. The Oceans were dangerous and the people lived in the now because neither tomorrow or yesterday was important. As they travelled to a variety of lands they noticed different cultures and out of this a new way of thinking materialised. This order of new thinking was based on 7 themes and for each theme a proverb was born…. 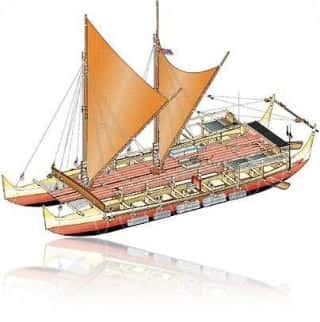 Today we can see similarities to the thinking or the mindset of NLP and these ancient proverbs (which some say date back as far as 750 AD) and even now there is value in the ancient thinking of the Hawaiian spirituality of Huna. There was a time when this way of thinking, of being, of spirituality was threatened and so many of it’s principles went under ground with people hiding them in chants and Hula dances. When I started to become curious about this ancient way I was really quite surprised to hear that up until as recently as 1979 (when the federal government passed the Native Americans Freedom Act) the people were not allowed to practice or to talk about the original teachings.

The Seven Principles of Huna

1. “All knowledge is not taught in the same school”

2. “No cliff is so tall that it cannot be climbed”

As they travelled the ancient people noticed that the land was connected by the oceans and that as they moved the stars shifted position. So from this they decided that there are no limits and the proverb was born. In NLP terms we say that everyone has all the resources they need and with goal settling tools such as ‘well formed outcomes’ we can set ourselves goals that we can achieve when we align our conscious and unconscious mind behind them – anything is possible!

3. “When the mouth yawns no fish are caught”

4. “Power resides in the present moment”

Obviously, if you are traversing dangerous oceans in small boat the present is what matters. Yesterday and tomorrow are not important! In NLP we say that everything is created in the now – you perception of the past in created in terms of your ability to think, remember and recall things about what happened in the past (as we know that often what we remember is our perception of it, and not necessarily reality). Equally our thoughts about the future are created in the now – our belief about what is possible or not is based on what we believe now/at this point in time. Because of the way you can change your perceptions, everything is created in the now – and so the power does indeed reside in the present. Change your thinking now and you can change how you think about your past and future.

5. “Love is being in the presence of someone or something, sharing joy, sharing breath”

The term “Aloha Spirit” is widely known and is a key part of Polynesian culture (even where the word aloha is not used directly).  Friendly acceptance, kindness, mercy, grace, charity, compassion and love are all encompassed by the single word – aloha. The roots of the word have been argued to point to the way in which this concept developed. ‘Oha’ means love, friendship, and joy, while ‘alo’ basically means to share an experience face-to-face.

When we consider the people on their papyrus rafts we can imagine the many people these relatively large rafts would carry (perhaps as many as 100 people). They would have had to huddle together for weeks or months at a time as they travelled the challenging ocean from land to land. It would have been essential that a communal spirit formed, strong enough to withstand the dangers, challenges and disagreements that most likely would have arisen. The Aloha Spirit was therefore a ‘must’ for their survival – one assumes it must have been the love, friendship, charity etc that must have got them throw. Thus the proverb of love being to be happy with someone or something.

6. “Let the singer select the song”

The sixth principle is based on the principle that Power comes from within and resides in everyone. The Polynesians talk of Mana – a power from within. Every thing and person has a mana of its own.This principle relates very much to the spirituality of these people – that all things and people have mana. Mana or power properly translated is the sense of influence or the ability to influence. In the NLP world we could relate this us being at cause for our own actions and taking action to achieve results – we are at cause when we take responsibility (rather than being at the effect of others).

7. “Show your knowledge of surfing on the back of a wave”

The ancient Polynesians had many different kinds of canoes, many kinds of fishhooks, many calendars, many different names for different things. They were flexible and adaptable since that fostered survival and creativity. They were seekers after the truth as they sailed the seas. Their seventh principle was effectiveness is the measure of truth. In the NLP world this drills down to walking the talk or, in other words, being congruent.

Having spent a little time looking into this topic, I find it fascinating that personal development goes back to the beginnings of time and that there are things we can learn from people that at first glance we may feel we have very little in common with. Personal development , learning from others, personal improvement etc is clearly nothing new. Whilst we  may change the processes, essentially the intentions are thousands of years old.

Are you ready for your next personal development opportunity?

If you’d like to enhance your personal development, learn some fantastic ways of thinking, techniques and methods for helping you resolve internal conflicts, remove limiting beliefs that hold you back, ways of empowering you, ways of making lasting change fast, learn powerful story telling through metaphors, help you get even better results in your life and work … check out our NLP Practitioner course.

WITH THANKS TO A VARIETY OF SOURCES AND MOST IMPORTANTLY  SERGE KING, TAD JAMES AND ALOHA INTERNATIONAL.